​Sexual organs and emotional manipulation are the weapon of choice by which another person is emotionally bullied into sexual submission. ​​​

Who Uses Their Sexual Organs as Weapons?

Both emotionally injured men and women are guilty of weaponising their sexual organs.

Men
Men who as children were bullied, disempowered, overpowered, criticised unfairly, emotionally abused, verbally abused or abandoned/rejected by their mothers (paired with an absent or passive father) are prone to subconsciously try to 'repay' other women for the pain caused by their mothers.

It is common for men to feel disempowered if they consider a provactively dressed woman is 'teasing' them. He reasons that she is dressing to sexually arouse him, but is not 'delivering the goods.'  In his emotionally injured mind, he can again experience a feeling of powerlessness.

Many men appear to adopt the thought processes that if they can convince a woman to 'have sex' with them, then the man wins.  Because she submits to his 'power,' the man (in his eyes) becomes the victor, the conqueror and the woman loses her previously designated value.  Now she is 'easy' and blamed for 'giving in so easily.'  Men become practiced in this abusive 'skill'  and often use sex as a weapon to disempower or overpower women.  (Many manipulative women also employ use of this skill in order to try to get a man to 'bond' to them or even to impregnant them in an attempt to 'trap' the man into marriage or child support payments).

What is the name given to the sexual act that describes a man overpowering a woman (and vice versa) and using her body for his sexual pleasure?  Rape.  Even if the woman does not believe she is being raped because she consented to have sexual interaction with a certain man, it does not mean she did not feel abused.  Many women have come to believe and accept that being used and abused sexually is now simply a requirement of 'playing the dating game' and hooking up is 'what you have to do to get a man interested.'

Sex is a powerful and dangerous weapon in the hands of someone who has been disempowered as a child and who has not resolved the power issue in their adulthood.

Women
Emotionally injured women who were denied a caring, affirming and protective bond with their fathers, also learn to use their sexual organs as weapons to manipulate male sexual arousal.  By doing so, they feel empowered and valued, even if it is only based purely on their presumed quality of sexuality.  Women who become 'sex workers' - ie prostitutes, strippers, escorts resort to this type of 'employment' and knowingly exploit their own and others sexuality to earn money, but also to gain a feeling of empowerment over men, who many of these women actually despise.  When men cheer, whistle and show approval of the woman's near naked or naked body, the woman gains a feeling of empowerment over the men.  She has exactly what they want - her sexualised body - and she also has what she wants - very definitely proclaimed male approval.  A normal, loving emotional bond with her father would have identified such sexualised male approval as being dangerous to the woman's emotional health, but without her father's loving guidance and protection, 'sex workers settle for male approval based only on their bodies.

If your sexual activities are not motivated on demonstrating your love to your spouse or permanent long-term partner, then perhaps you need to examine your motivation for having 'sex.' It might well be that your sexual desires are motivated by an emotional 'need' to feel more powerful, in response or at least connected to an abuse of power that you experienced in your childhood. 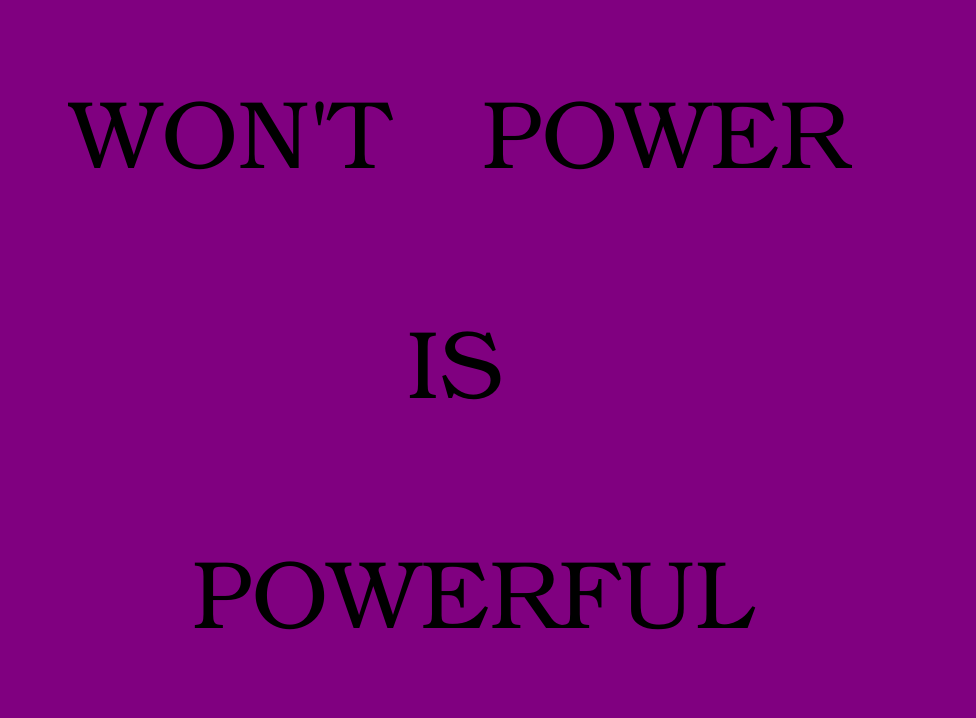 Won't power is actually very powerful.  When used correctly,  it is called integrity.

John believes he is powerless to stop his hypersexualised behaviour, even though he doesn't want to hurt his wife.  What John doesn't realise is that his belief is false.  He already possesses the will-power to quit his compulsive, sexually abusive behaviour. 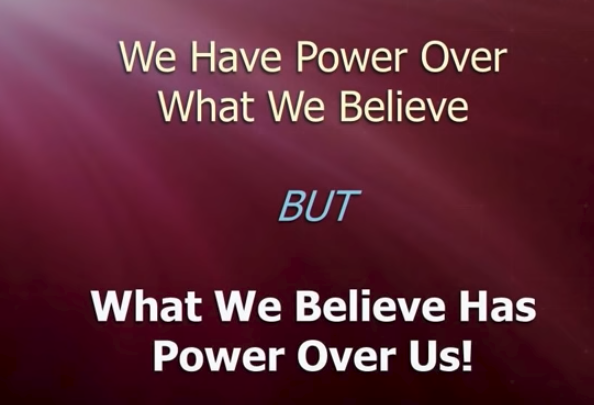 Who is powerless?
A woman who is raped has been over-powered.  A child that is molested by her father as she sleeps in her bed at night is powerless.  In both cases the person raped is powerless.  The woman could not stop the attacker from sexually abusing her.  The child was truly helpless to defend herself against the pedophile's attack.   How can the rapist claim the same defence?  If a rapist or pedophile tries to plead 'not guilty' because he was powerless to stop his compulsion to rape, the judge would not consider that to be a justifiable defence.  The desire to rape might have been overwhelming, but the man did in fact exercise his power of choice.  He chose to rape instead of making any number of other decisions eg. he could have decided to phone life-line counsellor, go to a hospital, to a police station, or to go home and lock himself in his house.  The rapist might claim that the woman was 'asking for it' by wearing provocative clothing, but that is illogical.  Despite the provocation, it was the rapist who made his own decision to rape.

If your wife, daughter, mother or sister was raped by a man and his plea was that he was powerless, how would you view that? Would you take pity on him? If you were sitting on the jury and a man claimed powerlessness as his defence for raping a woman, would you consider him powerless?
​
The false and dishonest belief of powerlessness is endorsed by organisations that claim absolute honesty is required from the very start to recover from so-called ‘sex addiction.’ However, it is hypocritical to say that addicts need to be brutally honest, but then claim that they are powerless victims when they were not forced to act upon their urges. Undoubtedly the urges are very strong as that is a side effect of being hypersexualised, but these so called addicts are not powerless. The belief of being powerless and victim mentality, and their already low self-worth, exacerbates their battle with self and reduces their will power to try to overcome the compulsions. Men and women inherently possess strong willpower but their will power has been deceptive eroded by our cultural perverse thinking and diet.
​​

Everyone must take full responsibility for making their own choices.
​
Partners of a troubled relationship can find support for healing when they realise that hypersexualisation is likely a major cause of their intimate difficulties.   Both partners might realise that both of them have been subtly manipulated since babyhood to become hypersexualised by the PIMP EMPIRE and the porn pushers.  Society has been thoroughly pornified and is now operating along the same lines as a sexually abusive cult.
It's very interesting that the success of PIMP EMPIRE depends on its customers/consumers believing that they are powerless to stop hankering after their commodities - the women and children who are 'servicing' their customers.  Young boys, youths, young men and old men are sold the same lie by the porn pushers.  The lie is that a man's hypersexualisation is simply normal sexuality.  Men are not even aware of the condition called hypersexuality.  The porn merchants assure them that their obsession with 'sex' and their compulsive sexual behaviour is again normal for them because they have 'a high libido' and that they are 'highly sexed' and that they are 'too much man for one woman' and that no 'red-blooded male' should deprive himself of the many 'sexual' opportunities to which he is entitled.   The situation is similar to a drug pusher telling a person addicted to a substance that their withdrawal symptoms are actually symptoms of having a naturally elevated need for drugs.  Sexual irritation, sexual pressure, constantly thinking about sexual interactions, feeling stressed as to how long you have to 'wait' until the next opportunity arises and compulsive/obsessive thoughts are all symptoms of being hypersexualised. Being hypersexualised is a real condition that reveals there have been an oversupply of dopamine in the brain.  Too much dopamine is toxic to the brain so the brain protects itself by becoming dopamine-resistant which diminishes the ability to experience pleasure.  The dopamine receptors don't respond to dopamine and this causes the 'compulsion' to engage in risky behaviour or to view images that stimulate the release of adrenaline.

Adrenaline is the fear hormone and it is not released in large quantities in normal sexual relationships.  Normal sex is exciting, but it does not produce a state of insecurity or fear.

Thankfully, hypersexualisation can be reversed, quite quickly, but it takes determination (aka will power), effort and a reprogramming of the mind.  The compulsions will pass when the brain heals forming new neural pathways and the neurotransmitters rebalance.

If the will power is used to resist the initial urges, the brain can recover from the abuse and can begin to reset itself in about 3 weeks.  By 3 months, new neural pathways are established in the brain and the dopamine receptors are generally functioning well again.

Recovered consumers are a huge threat to PIMP EMPIRE.  The message is that their consumers are entitled to have their 'normal' sexual appetites satiated by indulging in sexually abusive acts which they mislabel as 'sex.'
It is ironic that the official organisations whose purpose it is to assist so called 'sexaholics' and 'lustaholics' and 'sex addicts' preach the same deadly lie to their members. " You are powerless to recover from your 'sex addiction.'  You will always be 'triggered' or 'tempted' and will likely have on-going relapses.'  That is the same hellish lie told by the porn merchants to its slaves!

In the many 'non-recovery' groups that masquerade as healing centres, members are duped into believing the falsehood that they are powerless to stop their hypersexualised behaviour.  They are indoctrinated to believe that they will only be able to 'control' their sexually abusive urges temporarily.  The groups provide a 'comfort' network where supposedly 'powerless' men, meet with other men who also have been misled to believe they are powerless over the compulsions to sexually abuse others through porn, prostitution, strip clubs, phone sex, live streaming, swinging, pedophilia etc.  The result of this negative mind-set is that some members commit suicide because they can't accept a future where there is no escape from the torment of hypersexualisation and its compulsive obsession.
People who understand that they are not powerless, quickly gain confidence in themselves.  Their dignity of womanhood and and manhood is fully restored and they are free of all sexualised triggers.  The mind comes under the control of the loving spirit and men and women both become free from hypersexualisation and its triggers.  Like a slave set free, these empowered people begin to live the life they choose to live.  They become the person they always wanted to be.
​

​You're welcome to learn more in our programme.  Membership is free.

Love is Power.
​Love Empowers Us.

See the section called "Love is the Answer."
Go to 'love is the answer'

Beautiful Testimony of
​the Power of Jesus' Love to Break Addictions
​

The most powerful person who ever lived (Jesus) never exercised controlling or forceful power over anyone else.  The only power He used was the drawing power of Divine Love.  His enemies used loveless force to control His body, but they could not by any means, use manipulative power to control His mind.  Jesus never allowed Himself to be disempowered, because He never consented to refuse to Love anyone regardless of their behaviour.  Jesus loved His enemies and while He did so, they could not in any way control His mind.

When people use force to try to control/change a person's mind against their conscious will, that is an act that is absent of Love.
​
Love contains all the aspects of mental health. (Davy Politon, SDA pastor, 14 August, 2021, Zoom meeting)