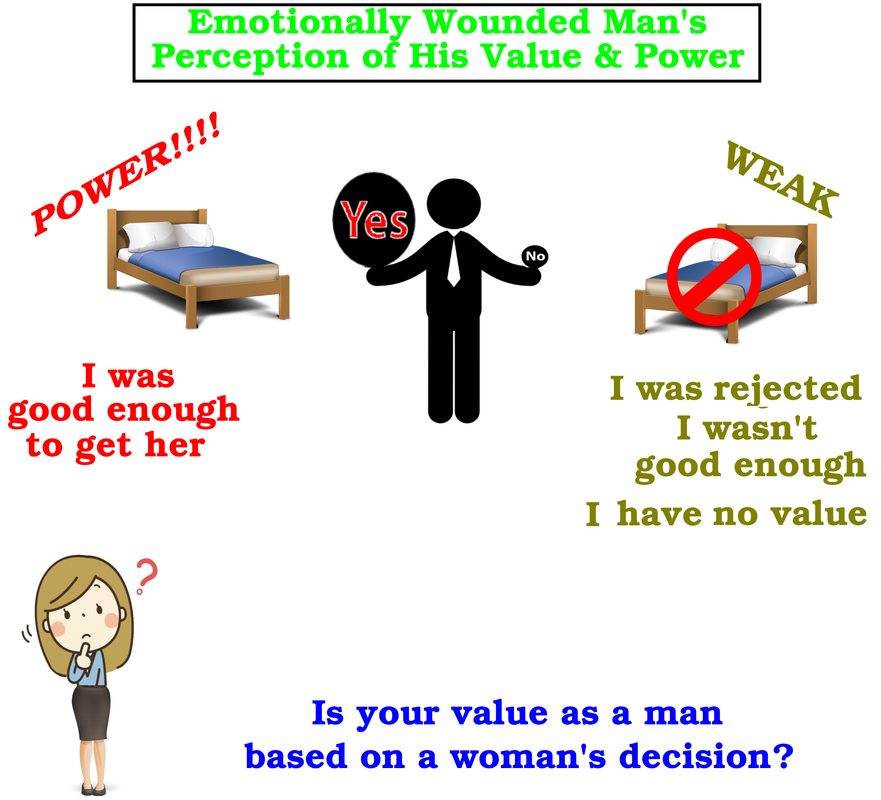 In many emotionally wounded men, ANY sign or display of interest made by a woman toward them, can be interpreted as a possible invitation to engage in sexual behaviour.  While most men can easily recognise flirting as being sexual behaviour, disempowered men who crave being value, can misinterpret even the smallest, friendly signal from a woman as also being sexualised interest in them.  For example, even a smile might be interpreted as being ‘she likes me’ when it is simply a female being friendly to another human being who happens to be a male.

When men are desperate to be told they have value, they will very often project that need onto any woman who gives them any kind of positive feedback with whom they have some slight interaction.

Value is strongly linked to power over a woman. This is especially easy to observe when the man grew up as a child in an abusive or dysfunctional family where his mother devalued him and criticised him.  Being unvalued necessarily linked that experience with being disempowered because the child could not oppose, protest or prevent himself from being abused by his parent/s.  So as a young man, the trigger reflex is to try to gain a female's approval of his value.  When approval is given, the man feels empowered over the woman.  If the man gains sexual access to the woman's body, he interprets that as being even more convinced of female approval and his 'value' increases along with his feeling of being powerful.  Sadly, the feeling of being valued and powerful erodes when the woman 'gives in' too soon and is quickly deemed as 'cheap' or 'easy' and the perceived value gained from conquering her, in minimised.  Soon the man must find a more valuable, 'higher class' or sexier woman who will respond to his advances.  The man might become someone who women label as 'having only one thing on his mind' or 'is all hands.'  She knows that the man is on a mission to use her for his sexual 'needs' but she most often does not understand that it is his need to gain her approval that is driving his motivation to be sexual with her.

To prove to himself that he has value, the woman must submit to his sexual advances.  He might repeat the old challenge to the woman, 'If you love me, you will have sex with me.'  Or he might say, 'I always try before I buy.'  These statements are coercive and a healthy woman will not be persuaded to have sex with the man who doesn't appear able to interest her in an emotionally close relationship.

If the woman capitulates and settles for a sexual connection even though there is no emotional connection, the dynamic soon changes.  The man thinks that the woman doesn’t have as much value as he had first projected onto her.  He questions, "How could she have given in so easily?"  He begins to devalue her and wonders why she consented to be ‘overpowered’ so easily.  The man regards sexual activity as a contest, and the woman is the ‘booty’ to be won in the conquest but then she becomes the disempowered one who is conquered. A conquered enemy does not have power or value – except for her flesh value if she allows herself to be continually sexually abused.  Soon though, the man finds a different woman onto whom he projects a higher value that the woman who is currently 'servicing' him. So the man goes on to develop a string of sexual conquests, but no true emotionally connected relationships with any of the women.

This dynamic of seeking for value and linking it with sexualised power can occur easily with women as well as men. Take for example the story that is told in the Bible in the book of John chapter 8.  A woman was supposedly 'caught' in the act of adultery.  According to the Jewish/Mosaic law, anyone who was caught breaking the seventh commandment which states, 'you shall not commit adultery' - was to be punished by being stoned to death.  The Pharisees (who were leaders of the Jewish religion) were angry with Jesus for upsetting the smooth working of their religio/political machine.  Jesus was exposing the man-made rules that the leaders have added to God's law and the Pharisees did not react well to the perceived impingement of their power over the people.  The Pharisees therefore tried to set Jesus us to trap him and have him taken out of circulation.  They invented a cunning trap.
​
The law of the Moses said that adulterers should be stoned, but the Pharisees knew that Jesus preached love, forgiveness and freedom from the bondage of sinful behaviour.  In his first sermon in Nazareth, those were the words Jesus said that he had come to fulfil.  "to set the captives free" (literally "to send out the oppressed, set free").  Jesus offered to break the power of compulsive behaviours that were holding people in bondage.  Sadly, the Jewish law held people in bondage also as many cruel punishments were attached to breaking of the laws.   The Pharisees had likely set up a situation where they arranged to 'catch' a certain woman in the 'very act of adultery' so that they could trap Jesus in a situation where they expected He would be unable to escape.  So the Pharisees conveniently 'caught' the woman in the act of adultery, while they incompetently were 'unable' to also 'apprehend' the male offender at the same time.  They dragged the woman through the streets and dropped her, most probably in an unclothed state, at Jesus' feet.   They posed the question, "The law of Moses commands that this women be stoned, but what do you say?"  If Jesus answered in agreement with the law of Moses, and agreed that the woman should be stoned, He would be in trouble with the Roman government as they forbade the Jews delivering the death penalty without Roman sanction.  If Jesus said that the woman should not suffer the death penalty, then He was speaking against the law of Moses and He would incur the death penalty or the wrath of the people for doing so.  Instead of falling prey to their trap, Jesus said nothing in answer, but began to write something in the sand.  Some of the Pharisees became impatient and pressed Him for an answer, but then they read His writing in the sand and mysteriously left.  Some Bible commentaries suggest that Jesus wrote some of the Pharisees' own secret, sexual sins in the sand, however John records that whatever He wrote, it caused all the 'saints' to disappear.  Finally alone with the terrified woman, Jesus said “Where are those who condemn you?” She replied that there wasn’t anyone left there who was condemning her.  Jesus reassured her, “I don’t condemn you either. Go and sin no more.”

By His lack of condemnation, or focus on her 'sins' Jesus made it clear that the woman should not condemn herself either.  He did not even give the woman 'a good telling off. '  Instead He restored her value and dignity with so much love that the woman was able to internalise that depth of value in her mind.  She was shown that she needed to know her own value and not to continue to live in shame and guilt from her past mistakes which were made because she was ignorant of her true value.  She had tried to gain value by letting men sexually abuse her, trading their ‘compliments’ about her body or sexual abilities for their verbal flattery/lies that she had value to them.  In reality, those men did not value her as a person, but for being sexually submissive to them.   The woman really only needed to accept that her value was not based on her ability to sexually submit to and please men.  Her value was given to her when she was conceived as a human being.  This important message was denied her and instead of knowing and being assured of her own value and behaving in a way that honoured her true value, the woman thought she had no intrinsic value of her own.  She looked to others and asked them to convince her that she had value. The woman was able to stop her inappropriate sexual behaviour by believing she had a value of her own which was grounded in what Jesus told her. Her value was truly above any human challenge and it stood firm like an anchor.  Because of her new belief, that she indeed had great value, the previously disempowered woman was enabled to act in healthy ways that no longer damaged her own mind and body.  Her self esteem and self respect grew as her thoughts reflected her sense of self-worth.   She was able to grow as a person, into the person she wanted to be, without feeling a 'less than' emotion.  She blossomed in her own strength when she realised she did not 'need' the supposed value input from any other person, in particular, without the ‘assistance' (sexual abuse) of any male person. 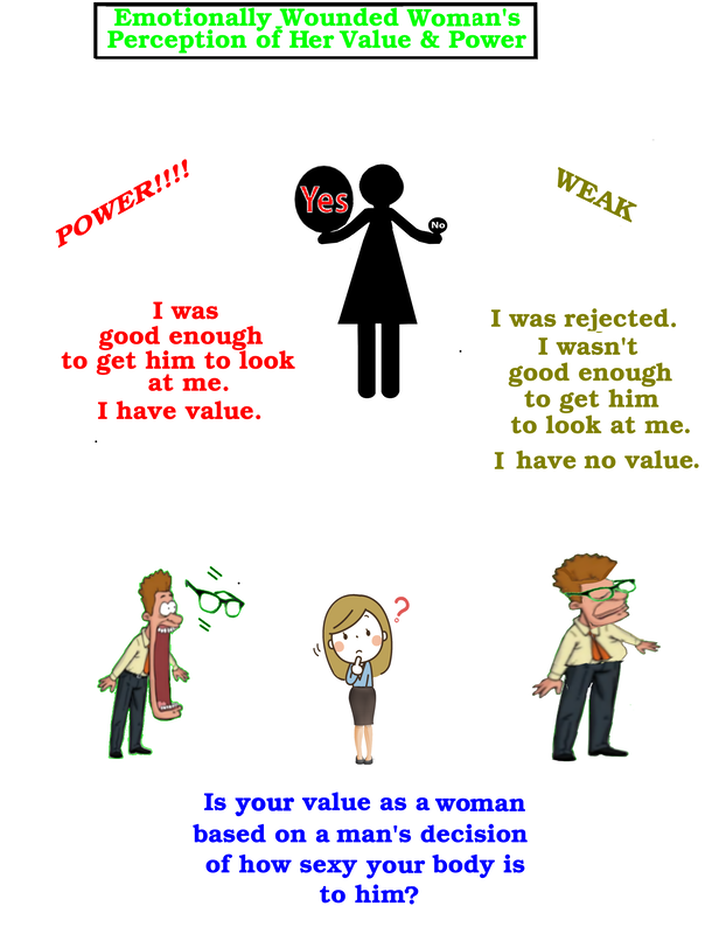 Women demonstrate the same insecurity about their value as men do, but it takes a different but still sexualised form.  Women will dress in sexually provocative ways specifically to arouse male sexual attention.  If the man 'notices' her, that is her reassurance that she has value.  However just as a man needs to have an endless string of multiple female sexual conquests in order to feel that he has value and power, so too the insecure woman needs to get a hit - to be noticed - by every man that she tries to arouse.  If her plan backfires and she attracts the sexual attention of a man who she does not consider to be a source of value to her, she quickly dispatches him with the comment, 'What a dirty old man' or other such devaluing remark.

A parent should demonstrate and convince their child that they are absolutely valuable and that this value can not ever be removed from them by anyone else, and neither can their value be added or increase by what anyone else says or does.  Human beings who know the depth of their intrinsic value are normal.  Those who are wounded seek to be constantly reassured that they have value from others, however this weakness leads them open to be manipulated.

Love does not manipulate, force, gas-light or coerce in any way.  Love offers freedom of choice in every situation.  If your relationships don't show that you are loved, no amount of reassurance from others of your value will ever be enough. ​