There are 4 primary ways that compulsive sexual behaviours can be triggered and understanding these ways is vital to becoming free.

"Many studies have drawn the connection between excessive food intake and addiction in both animal models and humans. A 2001 study in The Lancet observed a similar dearth of dopamine receptors in the brains of many obese people as in those hooked on cocaine or alcohol. The new research adds a more nuanced understanding of just how food can modify the brain—and shows that differences in the brain from the outset can predispose an individual for overeating."  (March 28 in Nature Neuroscience) https://www.scientificamerican.com/article/addicted-to-fat-eating/

Certain types of foods create an opioid effect in the brain and increase dopamine levels: 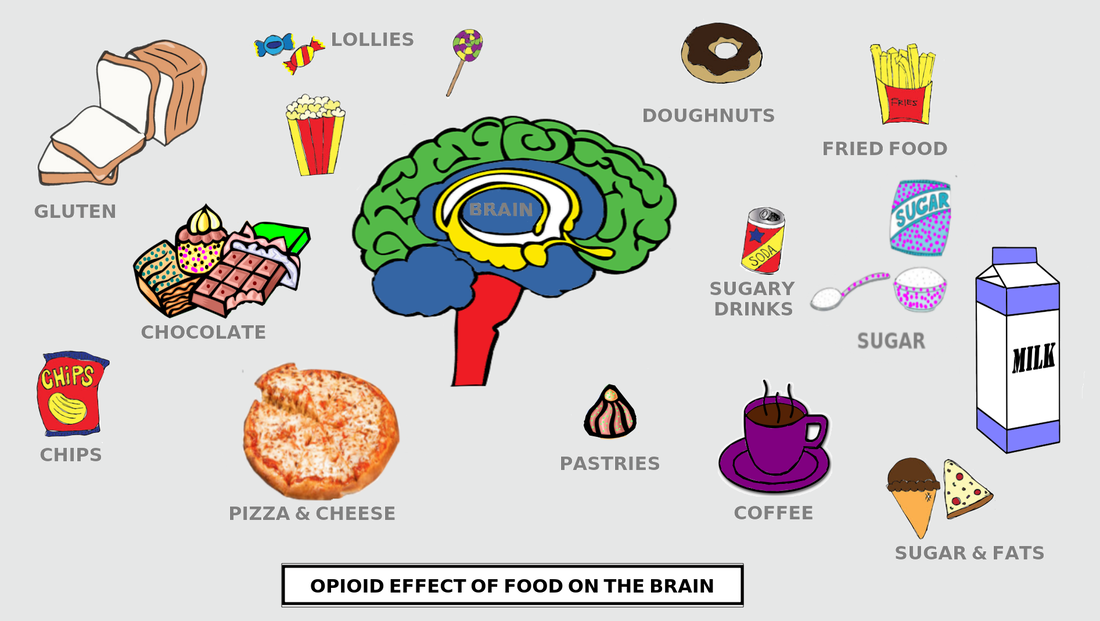 Addicted to Fat: Overeating May Alter the Brain as Much as Hard Drugs
In a study published online March 28 in Nature Neuroscience, describes "these rats' indulgent tribulations, adding to research literature on the how excess food intake can trigger changes in the brain, alterations that seem to create a neurochemical dependency in the eater—or user. (Scientific American is part of Nature Publishing Group.) Preliminary findings from the work were presented at the Society for Neuroscience meeting in October 2009."   The study found that, "like many people, rats are happy to gorge themselves on tasty, high-fat treats. Bacon, sausage, chocolate and even cheesecake quickly became favorites of laboratory rats that recently were given access to these human indulgences—so much so that the animals came to depend on high quantities to feel good, like drug users who need to up their intake to get high." www.scientificamerican.com/article/addicted-to-fat-eating/
The Opiod Effect of Certain Foods
a) Opiates binding to opiate receptors in the nucleus accumbens: increased dopamine release www.drugabuse.gov/publications/teaching-packets/neurobiology-drug-addiction/section-iii-action-heroin-morphine/4-opiates-binding-to-opiate-rece  (link removed) and https://www.drugabuse.gov/publications/teaching-addiction-science/brain-actions-cocaine-opioids-marijuana
b) Gluten can be degraded into several morphine-like substances, named gluten exorphins. These compounds have proven opioid effects and could mask the deleterious effects of gluten protein on gastrointestinal lining and function. Gluten could “mask” its own toxicity by exorphins that are produced through gluten protein digestion. Gluten-containing cereals are a main food staple present in the daily human diet, including wheat, barley, and rye.  jhpn.biomedcentral.com/articles/10.1186/s41043-015-0032-y
c) Junk foods and sugar can cause the same addictive response and withdrawal symptoms as cocaine and other illicit drugs www.healthline.com/nutrition/10-similarities-between-junk-foods-and-drugs#section10
d) Sugar is noteworthy as a substance that releases opiates and dopamine and thus might be expected to have addictive potential. https://www.ncbi.nlm.nih.gov/pubmed/16460879/ and https://www.ncbi.nlm.nih.gov/pubmed/3161588
e) ​​Dairy and cheese trigger opiate and dopamine release as cocaine does - Cheese is as addictive as drugs because of a chemical called casein. This is found in dairy products and can trigger brain's opioid receptors. Opioid receptors are linked to the control of pain, reward and addiction https://www.dailymail.co.uk/sciencetech/article-3285478/Cheese-really-like-crack-Study-reveals-food-triggers-brain-drugs.html and http://www.latimes.com/food/dailydish/la-dd-cheese-addictive-drugs-20151022-story.html Pizza, unsurprisingly, came out on top of the most addictive food list. The study found certain foods are addictive because of the way they are processed. The more processed and fatty the food, the more it was associated with addictive eating behaviours. Cheese is especially addictive because of an ingredient called casein, a protein found in all milk products. During digestion, casein releases opiates called casomorphins. [Casomorphins] really play with the dopamine receptors and trigger that addictive element http://www.latimes.com/food/dailydish/la-dd-cheese-crack-science-20151023-story.html And the cheese-equals-drugs idea came from Dr. Neal Barnard, president of the Physicians Committee for Responsible Medicine and author of "Breaking the Food Seduction." In an article for VegetarianTimes.com Barnard called cheese "an addiction." "Actually, it's more accurate to say I'm hooked on casomorphins, the tiny, biologically active compounds produced when my body breaks down milk proteins," said Barnard. When the body attempts to break down casein, a protein found in all milk products, the amino acids in the protein don't completely separate, resulting in strings of amino acids. Casamorphins are the smaller strings of amino acids. " Casomorphins attach to the brain's opiate receptors to cause a calming effect in much the same way heroin and morphine do," said Barnard. Laymen terms article outlining the basic science of cheese and its opioid drug properties. “ The casomorphins only explain why we like cheese so much and why it is so hard to give it up. It’s the sugar (lactose), animal protein and the saturated fat content (which triggers IGF-1 in the body, and is the reason it is now being strongly linked to several cancers) that make it so bad for you.” https://yumuniverse.com/addiction-to-cheese-is-real-thanks-to-casomorphins (link no longer working).  In regard to addiction though, it is the opioid effect of dairy casomorphins that must be considered to be a significant factor too.
f) Gluten grains and pseudo grains contain substances that cause an opioid effect https://jhpn.biomedcentral.com/articles/10.1186/s41043-015-0032-y

Subtle manipulation of human sexuality by Porn Merchants in our pornified society, has caused many people to anchor a sexual response to a non-sexual cue.   Anchors might be called 'fetishes' while other cues are considered to be 'normal.'
Examples of common fetishes are high-heeled shoes, underwear, images, acts and scents. Many fetishes are suffered by serial, sexual murderers who are unable to experience sexual 'satisfaction' or arousal unless their fetishes are indulged - eg violence accompanies the sexual activity, 'sex' with a corpse etc
Cues considered to be normal are the sight/images/videos of naked women, even if those women are clearly being insulted, degraded, humiliated and abused.

Childhood trauma, post-traumatic stress disorder (PTSD) and complex traumas cause a person to feel insecure and unsure of their true value.  The emotional wounds inflicted in childhood or in any abusive situation, can prompt the sufferer to try to medicate the wound in an effort to numb or 'escape' their pain.  Some of the medications used as escapes or numbing agents are drugs, gambling, alcohol, smoking/hookah,  over-eating, eating dopamine increasing foods, watching movies, gaming, reading fiction books, sexually abusive behaviours i.e.  pornography, visiting strip clubs, using prostitutes, rape.

False beliefs can trigger compulsive urges if a person believes that a sexual response is 'natural' or that they are powerless to resist the urge and that because it is 'natural' they will have no relief from the urge for the rest of their life.  When a hypersexualised person believes they are doomed to suffer so severely forever, it can trigger an effort  to escape the pain.  An emotionally injured person is robbed of any hope when they are convinced that they are powerless to overcome the compulsion.


Some false beliefs are that: